American Heartbreak's assault on the SF music scene perfectly coincided with our publishing schedule, and we featured this introduction to the band in Teenage Kicks #1.

"We're ready to conquer the world!" Lance Boone, lead singer for American Heartbreak, has no reason to doubt his enthusiastic proclamation.

Billy Rowe: Guitarist with superstar potential. Goes from blonde to redhead in the blink of an eye. Formerly with Mindzone and Jetboy. Credentials include two sadly overlooked albums on MCA. Can boast about a member of Hanoi Rocks joining his band!

Erik Lannon: Drummer par excellence. Curly hair and a mischievous smile. His résumé involves just about everybody from Mordred to House of Wheels to the Bay City Rollers. Big fan of the Sweet and thinks Phil Lynott is God!

Curtis Grant: Tattooed and muscular. Plays guitar with a vengeance. Like Billy and Erik, he's a San Francisco native (the three have known each other since childhood). Spent some time with LA's Black Cherry.

Formed a little less than a year ago from the ashes of Mindzone and Diamond Star Halo, American Heartbreak have been gigging constantly, with the intention of "turning the City upside down," says Lance. They also want to "bring back the element of FUN, which is desperately missing in a lot of the bands on the local scene."

The group took its name from the Girl song "Heartbreak America," and collective influences include D-Generation, the Wildhearts ("I can't say enough about the Wildhearts," remarks Lance), the Dictators, the New York Dolls, and Blondie.

Lance describes American Heartbreak's sound as "very heavy, dark pop. It's rooted in punk, although it has an underlying pop beat."

Currently, the guys have three demo tapes in circulation, featuring such originals as "Methadone Baby," "Another Wasted Day" and "Nobody Likes Me," as well as "Richey James" — their tribute to the Manic Street Preachers' guitarist.

Lance's semi-autobiographical tune "Dead at Seventeen" is also included on the demos. Discussing the inspiration behind the lyrics, he reflects, "I remember not having any money, being bored on Saturday afternoons. And feeling like: Shit, if this is all there is at 17, I might as well be dead."

They're already packing San Francisco clubs with an ever-growing following. And as one of their press releases points out: "A lot of people are about to pay attention to American Heartbreak." Be one of the first! 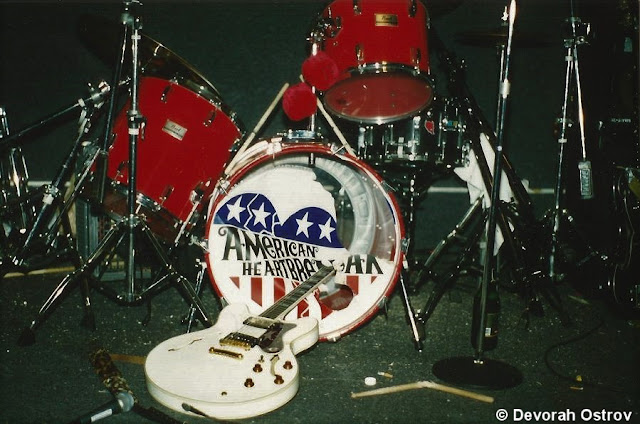